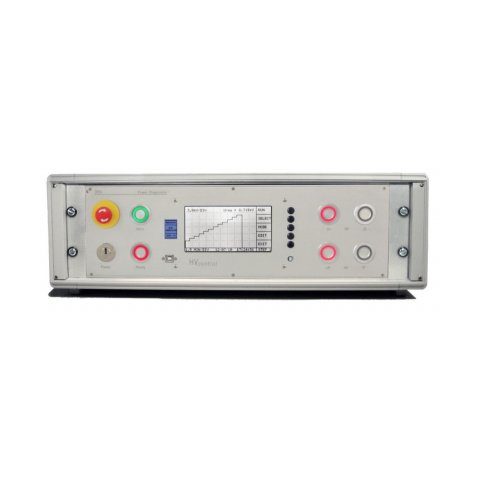 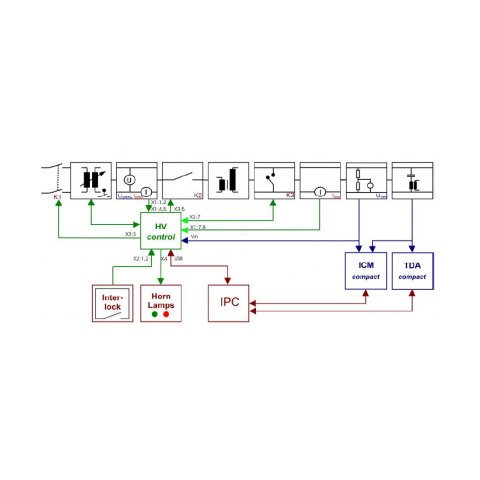 The HVcontrol unit combines all standard functions required to operate a high voltage transformer manually. It includes a safety contact loop, the measurement of primary and secondary current, and the primary voltage. User-settable limits for the primary and secondary current trip the main circuit breaker. The safety loop, as well as the emergency stop, is hard-wired and equipped with forced contacts.

Due to its flexible design, the HVcontrol can be used on any high voltage test set. Especially in the modernisation of old test sets, the HVcontrol offers a multitude of improvements if compared with conventional relay-based controls.

The unit comes with rigid solid-state piezo pushbuttons. Each of these control buttons has an illuminated ring to indicate the state of the function controlled by this specific button. Thus, it allows an easy and intuitive operation of the HVcontrol.

The HVcontrol comes in a 19"-subrack (3HU) which makes it an easy replacement of older controls having the same size. The HVcontrol offers conveniently detachable screw terminals for the different controls and optional instruments on its rear panel.

Besides a mere drop-in replacement of an old control, the HVcontrol can be combined with other test instruments of Power Diagnostix to build a fully automated acceptance test environment. It can be ordered with several optional functions, e. g., for STEP tests, TTL gating. It's also possible to deliver the HVcontrol with a SCOPE display.

Further, the instrument can be combined with the ICMcompact for partial discharge testing and the TDAcompact for tanδ and capacitance measurements.

Power Diagnostix also provides industrial PCs to control the combination of instruments. Depending on the application and its requirements, the instruments can be mounted in desktop enclosures, 19" racks, or control desks fitted with 19" mounts.

The HVpilot software allows the complete supervision of a high voltage test sequence. Further, the software offers convenient programming and editing of the test sequences. Additionally, the software can connect to ICMcompact and reads the partial discharge level, and to TDAcompact to read tanδ as well as the tested device's capacitance. An export function allows saving the acquired data in file formats for MS-Excel and MS-Word.

There are no articles in the shopping cart